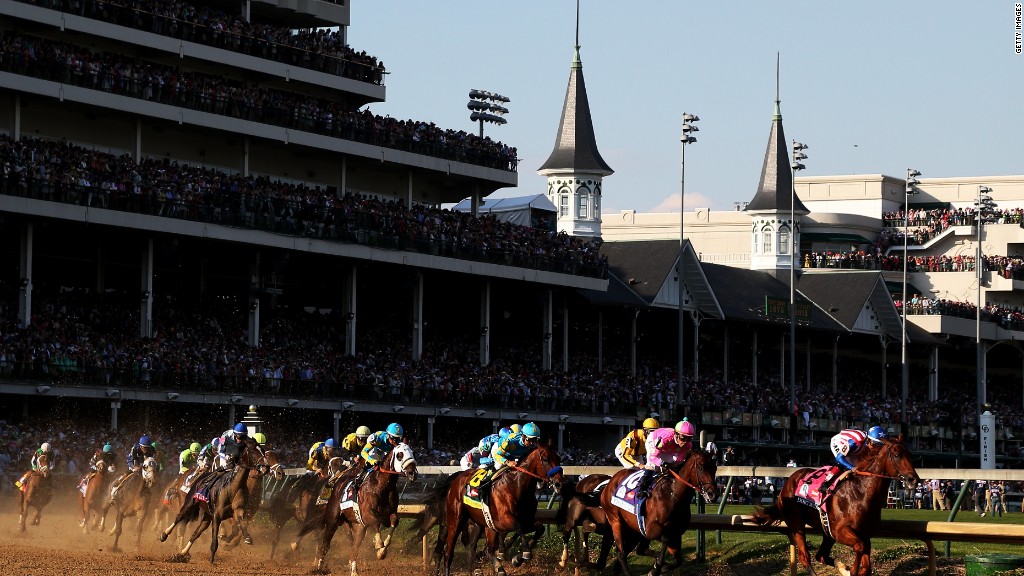 Betting on sports is illegal in most of the United States. Horse racing is an exception — and the biggest race is Saturday.

Putting money on the race is legal in most of the country thanks to a 1978 law that allows people to bet on horse races across state lines, not just at the track. An amendment in 2000 allowed wagers online and by phone, though those are still restricted or banned in 10 states.

The odds in horse racing change constantly depending on which horses are drawing the most bets. As of Friday afternoon, the favorite at Churchill Downs was Classic Empire, at 4-to-1, followed by Always Dreaming and McCraken, at 5-to-1.

There are 20 horses in the field. Post time on Saturday is 6:34 p.m. ET. The race will be broadcast by NBC.

Three of the biggest betting sites are TwinSpires.com, the official site of the Derby, and Bovada and Xpressbet. For those hoping to get in on the action, Kevin Kerstein, a racing analyst at Churchill Downs (CHDN), has some tips.

The easiest way to win

Novices can try their luck with wagers called win, place and show.

With a show wager, which is the easiest way to win but has a small payoff, the horse you pick must finish first, second or third. A place wager means your horse must come in first or second, while a win means just that — your pick has to come in first.

Kerstein suggests picking a couple favorites and placing $2 bets. There’s no shame in picking the favorite: In 142 years, the favorite has won almost 40% of the time at the Derby, including the last four years.

“You want to bet on the winner,” Kerstein told CNNMoney. “It’s more fun to say I picked the winner of the Kentucky Derby.”

The next level is placing bets on how more than one horse will finish.

In an exacta, you pick which horses will come in first and second. “Boxing” an exacta pick means you get a payoff if you pick the top two, regardless of how they finish.

Kerstein said more experienced bettors may want to fill out a Pick 3. That means picking the winners of three consecutive races. There’s also a Pick 4 and a Pick 6. These wagers typically have low starting prices — about 50 cents. But you have to pick correctly at least three times in a row.

But Kerstein doesn’t recommend spending a whole lot of money on one of these bets. The odds are overwhelmingly against you.

“He was the champion 2-year-old when he ran and came back this year as a 3-year-old,” Kerstein said. “He has a local connection to Kentucky, and he’s been training well.”

His superfecta bet would be Classic Empire to win, McCraken in second, State of Honor third and J Boys Echo fourth.

One final note: Kerstein said the preferred starting position for jockeys and their horses is between gates five and 12. But, for bettors it generally doesn’t matter where a horse starts — unless it’s gate 17. No horse has ever won coming out of that gate.